Right now, I have no fewer than four posts, all about 95% complete, that have been sitting in my draft folder for the past week. They’re all perfectly mediocre, yet somehow I couldn’t bring myself to hit publish on any of them, and now it seems pointless to post about things I was experiencing or feeling almost a week ago.

But never fear, I’ll do it anyway. And just to keep things nice and confusing, let’s go in reverse chronological order, shall we?

I spent most of the morning making my husband’s birthday cake, this German Chocolate beauty from Annie’s Eats (originally from David Lebovitz). It was my first experiment with high altitude baking, and although it required a fairly heavy amount of math first thing in the morning, this chart from King Arthur Flour made it pretty straightforward. I have a few pictures, but those will have to wait because I’m desperate to get this post (finally) published and I can’t bring myself to hunt for my iPhone right now. 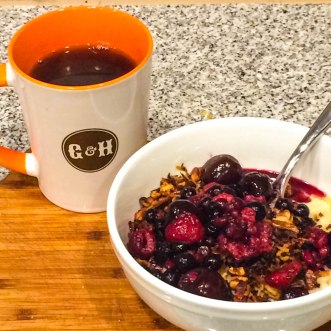 Breakfast of champions – oatmeal with (slightly over) toasted pecans and coconut, and cherries, raspberries, and pomegranate.

I crave oatmeal about 3 times a year – when I’m sick. In true my body hates me fashion, that usually happens around the holidays or on vacation. We have big plans for this holiday weekend, including a request by the birthday boy to hit up a lumberjack show and a wings & whiskey festival. I was hoping this big bowl of oatmeal and a full pot of coffee would kick my immune system into gear, and it mostly worked (hallelujah!). Because lord knows I’m not missing the opportunity to wear my flannel button-down in an appropriate setting.

Overall, Wednesday pretty much sucked. I spent my morning waiting in line at the post office in an attempt to track down a package that was supposed to be delivered by 9/1, but wasn’t, because USPS. (They, of course, DID deliver another package that we didn’t pay to have overnighted). The package contained a power cord and water hose, which we needed for our washer/dryer that were getting delivered that morning. So, after waiting in line at the post office for 45 minutes, I was told that the package had already been sent out on a truck (despite their promises to Amazon that it would be there waiting for me to pick up in person) and that they had no idea when it would be delivered. That led to a very frantic run to Home Depot, which is not a place where you can find what you need quickly and escape. Despite the stressful morning, everything worked out and our 29-inch-wide dryer even fit through our 29.5 inch doorway. The helpful delivery people set everything up, turned it on to make sure it worked, and were out within 20 minutes. After hauling our laundry to the local laundromat (full of colorful characters, as you’d imagine) for the past month, I am THRILLED to have in-home washing and drying capabilities! Plus, I’m pretty sure these babies have more technology than my family’s first computer back in the 90’s.

I never thought I’d be so happy about doing laundry.

The suckiness of Tuesday was balanced out by the awesomeness of Monday (how often does that happen?), and I accept that. A few months ago, I found out about the Film on the Rocks series at Red Rocks Amphitheater. The overall movie lineup is pretty good, but when I saw they were screening Guardians of the Galaxy, I knew I had to buy tickets. Hubby is a huge comic book nerd and GotG is one of his faves (I even bought him this bobble head Groot for his birthday, shh don’t tell!), and I’ll admit that GotG is not a typical comic book movie (as in – it’s actually good). The doors opened at 6:30 and the movie started around 8:30. Red Rocks lets you bring in your own food and drink (but no alcohol), so we packed a picnic dinner and for $15 a ticket, we got to see two awesome bands, a decent stand-up comedian, and a hit movie, all in an incredible setting. Seriously, photos do not do this place justice.

Sunday is usually our get shit done around the house day, but we took a break from cleaning and organizing to visit a local distillery. I’ll admit I’m not the biggest whiskey drinker, but the tour at Stranahan’s Colorado Whiskey was a lot of fun and actually quite informative, so the nerd in me was happy, plus it was free, which is hard to beat. On our tour, we learned that Stranahan’s is made using scotch ingredients, rather than whiskey (malted barley, rather than corn), but aged like a bourbon, in a new charred oak barrel. We got a sizable taste at the end of the tour, and while it won’t be my go-to after-work drink, I understand why there

Being the responsible employee that I am (total sarcasm, you can read more on that below), I boycotted the mountain of work I have left (because there’s always Monday), and we went shopping for snowboards, boots, and bindings. After one season of skiing in Colorado, my husband is convinced that we’re proficient enough at that (he’s actually quite a good skier; I’m just happy I haven’t broken anything yet), and we’re ready for our next adventure. Which will basically be us eating shit for 3 days of snowboard lessons and then hopefully being able to make it down the mountain without dying.

Because we’re both snowboard n00bs, we opted for more simple, less in-your-face snowboards. But in the extremely unlikely event that I become a bad-ass snowboarder, here are some boards I have my eye on:

I’ve been in Chicago all week for work, and despite hauling my personal laptop along with me, I was so busy that it did nothing but sit on the hotel desk all week, untouched. After working 12 hour days crunching numbers, the last thing I wanted to do when I left the office was go back to my hotel and boot up another electronic device. Which means that I was “that person” in security with two laptops (work and personal), for pretty much no reason.

I did make time to venture out into the city with my boss and his wife (who was also in town) to Kingston Mines, a famous blues club, and we were out until 2 in the morning. On a work night, which is at least 3 hours later than I’m ever up on a weeknight. Doesn’t that make me sound old, complaining about being up too late? To make matters worse, I also had to sneak to the bathroom multiple times in order to dump out half my drink because I couldn’t keep up with them, and “no thank you” isn’t an option when the boss’s wife insists we order another round (and another, and another). Pouring out free alcohol?! WHO AM I? But it turned out to be a good life decision, as I was exhausted, but not hungover, the following morning. My boss appears to be just as chipper as ever this morning, and he’s 30 years older than I am, so I need to learn his secret.

I also had the weirdest cab experience of my life, in which my cabbie blasted the Christian rock radio station for the duration of our trip, sang along with his favorites (at times, with both hands in the air – Jesus, take the wheel), asked if I wanted to read his Bible (kept on the armrest in a bedazzled leather case) aloud, and told me he would pray for my soul.

But hey, my flight landed safely and 30 minutes early, so I guess I shouldn’t complain about the extra prayers.

2 thoughts on “Let’s do the timewarp”