It was our third and final day in Paris and we’d saved some of the best museums for last – the Louvre, Musée d’Orsay, and Musée Rodin.

We arrived at the Louvre just before it opened, and the line to enter through the pyramid was already an hour long. Because those people were waiting to buy tickets into the museum and not to get into the museum itself, we were able to waltz right in using our Paris Museum Pass (which we’d purchased the day before at the Versailles TI). Rather than deal with the crowds at the lauded pyramid entrance, we took advantage of the special Museum Pass/Group Entrance under the pedestrian walkway (Pavilion Richelieu). A disinterested attendant casually glanced at our passes, and that was that. 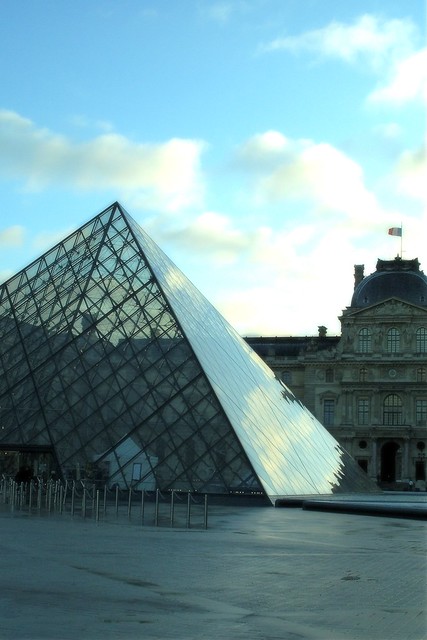 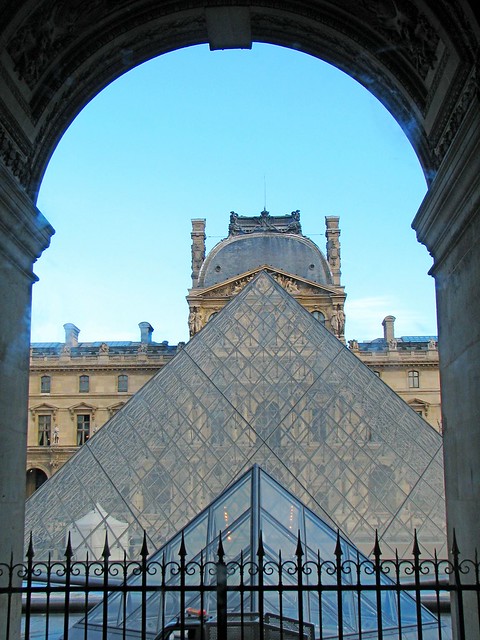 Once inside, we made a beeline straight for the renowned Mona Lisa. Adam took a selfie with the lovely lady herself and then we hustled off to view other wings of the museum, slightly ahead of the hoards of Asian tourists. To properly explore the Louvre would take weeks, if not years, and our strategy was to focus our visit on the heavy-hitter superstars, rather than wander aimlessly for the sake of it. Traveling through an art museum with my husband is like going with a child – I start a mental countdown the second we walk through the door and know there’s only a limited amount of time (usually about an hour; two if I really push him) before he’s going to be bored and hungry. I wanted to make sure I saw all my favorites before he reached his museum saturation point.

The Louvre houses over 30,000 works of art spanning centuries (ancient times through 1850 AD), so having a guidebook and a plan was essential for getting the most out of our visit. I like art, but am certainly no expert, and it was nice having explanations to give the art deeper meaning. Our guidebook walked us through the ancient antiquities (the Code of Hammurabi, from 1750 BC), to the golden age of Greece (the famed Venus de Milo), to the medieval world (altarpieces by Cimabue and Giotto), to the Italian renaissance (so many da Vinci’s and a few Raphael’s for good measure). We decided to skip French neoclassicism and romanticism, since those periods of art don’t really do anything for me. 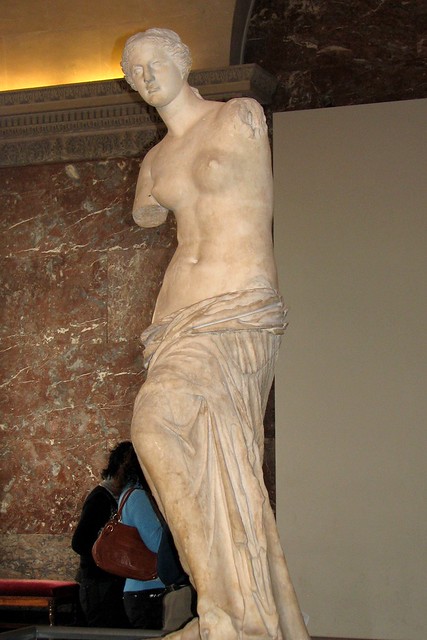 Adam suffered the Louvre for a lot longer than I thought he would – we were there for a full 3 hours which is the longest I think he’s spent in a museum, ever. The Louvre is like that, though – around every corner is another masterpiece, and it’s nearly impossible to leave. Plus, the interior of the museum itself could be an exhibit itself; the place used to be a palace afterall. Eventually, though, the siren call of another French lunch was too strong (why go more than 4 hours without eating when there’s so much delicious food to try?), and we did eventually find our way to the exit, via the glass pyramid. 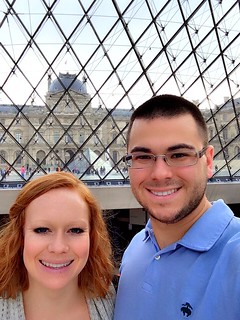 Because of all the sightseeing we’d done the day before, we wanted to take it easy during our last day in Paris. After a long lunch, complete with a few glasses of wine and a cheese plate to end the meal (exactly how every lunch should go, in my opinion), we wandered leisurely over to the Musée d’Orsay (famous for the largest collection of Impressionist art in the entire world).

Lines at the Orsay were every bit as long as at the Louvre, and our museum passes again proved to be worth their weight in gold. The Orsay was absolutely packed, so we didn’t spend long inside. We did a whirlwind tour of the Impressionist rooms, stopped to see the famous clock (but didn’t wait in line to take a picture of it, see below for an image from Wiki), and rested for a few minutes on the benches on the ground floor.

It’s difficult to follow a visit to the Louvre with another art museum, but because entry was included with our museum passes, which had already paid for themselves, we didn’t feel the pressure to “get our money’s worth” out of the visit. We were able to pop in, see a few of our favorite paintings, admire the architecture of the museum itself (the building used to be a train station), use the free WCs, and get out.

At this point, the only thing left on my must-see list was the Auguste Rodin museum, which consists of two parts, the mansion interior and the garden. Both sites were covered by our museum pass, so we did a quick spin through the interior, but the real show-stopping pieces are displayed in the garden, in the setting the artist intended. Entrance to just the garden costs a paltry 1 euro, an absolute steal – I can’t believe we missed visiting this on my first trip to Paris.

The main highlight for me was the Burghers of Calais statue, which – in addition to being an astounding work of art – tells an incredible story. During the Hundred Years’ War, English King Edward III laid siege to the French city of Calais, a strategically important port town. After receiving no reinforcements from their own king, Calais was facing starvation and had no choice but to parley with the English. Edward III offered to spare the city if 6 city leaders would sacrifice themselves by walking out of the city with nooses around their necks and presenting him with the city key. The statue by Rodin captures the moment when the wealthiest merchants (burghers) were headed to their fate – the figures are alternately determined, resigned, desperate, and overcome by emotion. The Burghers of Calais depicts movement and requires movement from the viewer – it’s impossible to see the faces of all the burghers at once; to fully appreciate the depth of emotion, you have to circle the statue at least once.

Unfortunately, I was unable to take a photo (damn you, shade and sunlight!) that did the statue justice, but you can see images on the interwebs here here and here.

Unlike the Burghers, the famous Thinker statue was extremely cooperative, and I was able to get some cool pictures of this iconic artwork. 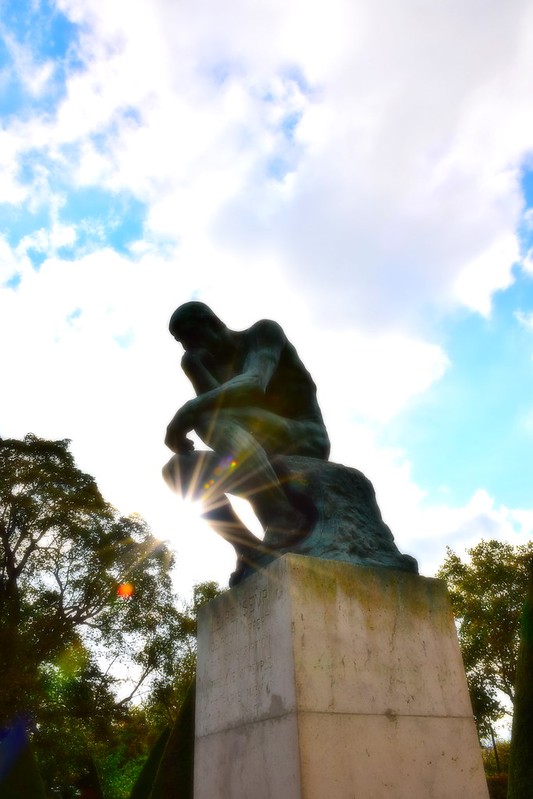 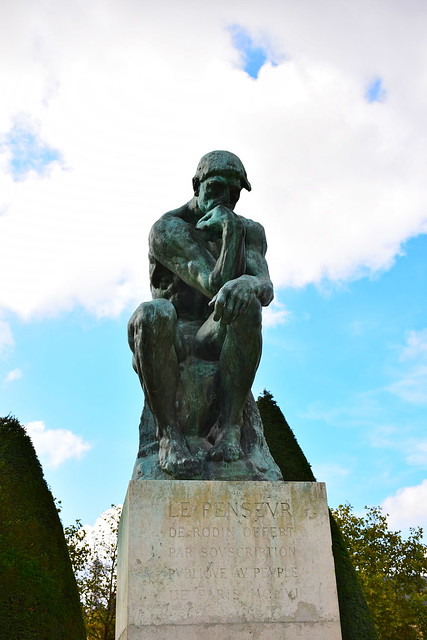 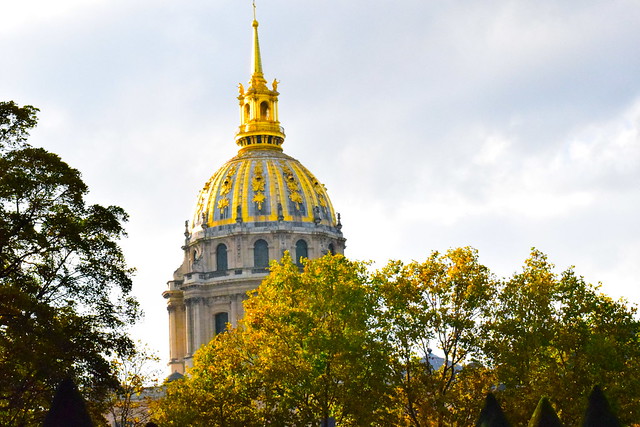 After the Rodin museum, we slowly made our way back to our hotel and decided on a nearby cafe for wine, people watching, and an early dinner. I decided on French onion soup and this heavenly, delicious, amazing, perfect dish – fried Camembert. Can you believe I lost weight on this vacation? I think it’s proof that I should eat nothing but cheese, wine, and bread. Oh, and walk about 8 miles a day. 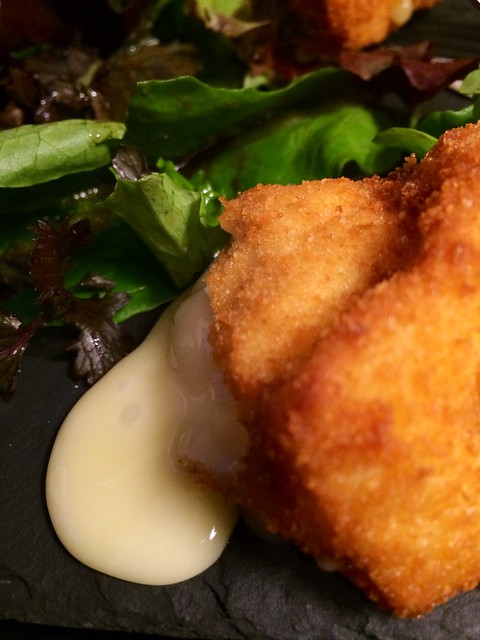 What a perfect last night in Paris! From the City of Lights, we traveled to the region of Normandy to tour the D-Day sites, visit an incredible pilgrim’s retreat, and eat as many mussels as possible.