Early in the morning, we boarded a train from London’s St. Pancras International station and a few hours later, arrived at Paris’s Gare du Nord. From Gare du Nord, we made our way to our hotel, located southeast of Luxembourg Gardens. By the time we checked into our hotel and freshened up, it was time for lunch. Because we were staying in a very residential area away from the tourist hubbub, we decided that wandering the area and looking at menus was our best option. We didn’t have far to go, as there was a very enticing cafe only a block away from our hotel. It was clearly a local place, with daily specialties scrawled on a chalkboard and very little in the way of English translations.

Luckily for us, most of the waiters seemed to speak enough English that we were able to order lunch and wine without any hassle whatsoever. Adam ordered some heavenly casserole concoction of cheese, ham, potatoes, and enough cream to kill a cat, while I ordered a salad, which sounds healthy, but only because you don’t know that it came with cheese, bacon, and potatoes cooked in duck fat. If I could get that kind of salad in America, I’d be ordering a lot more of them, let me tell you! After an amazing first meal in Paris, we walked towards the Eiffel Tower through Luxembourg Gardens. There were statues, and fountains, and a former palace built by a Medici princess. 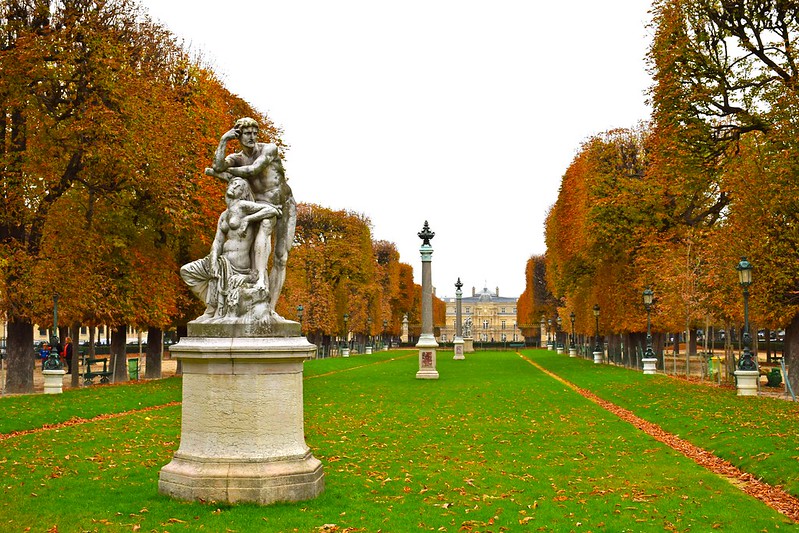 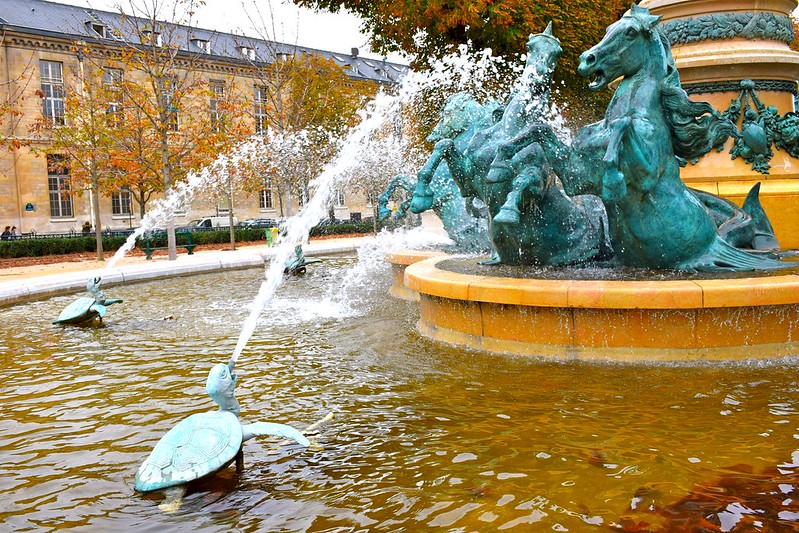 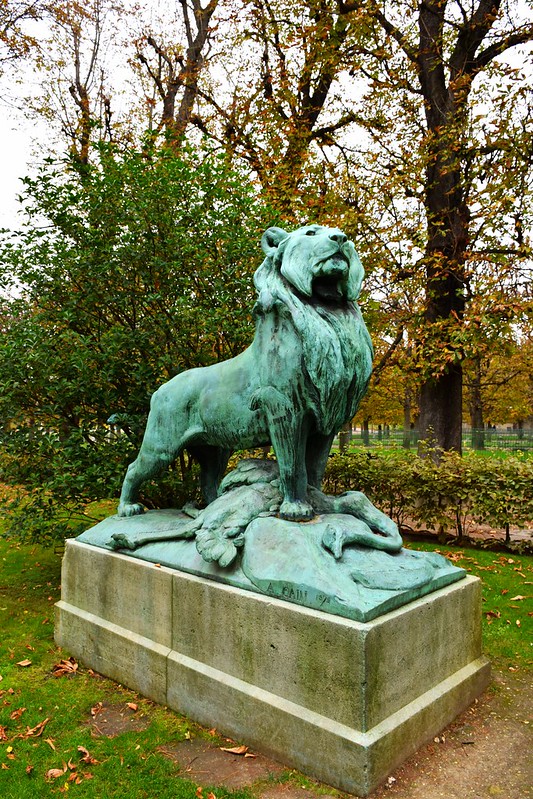 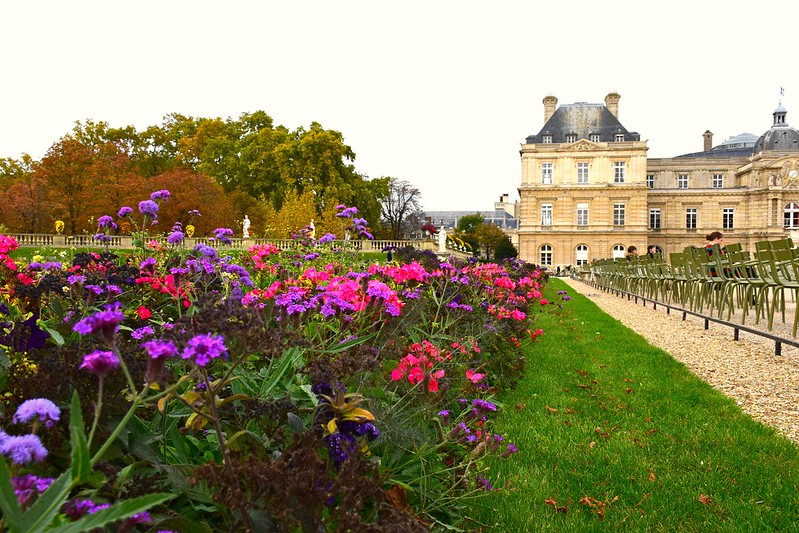 Since we had some time to kill before our Eiffel Tower reservations, we decided to stop in the Rue Cler neighborhood for pastries and wine. You know, just in case we burned off too many calories on the walk over. 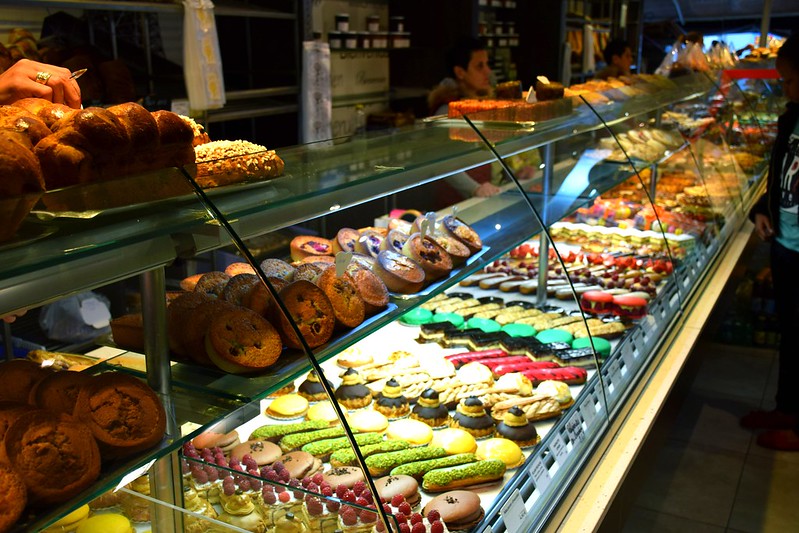 This is my kind of wine list. I went with the low cost option, because really – is there bad wine in France? 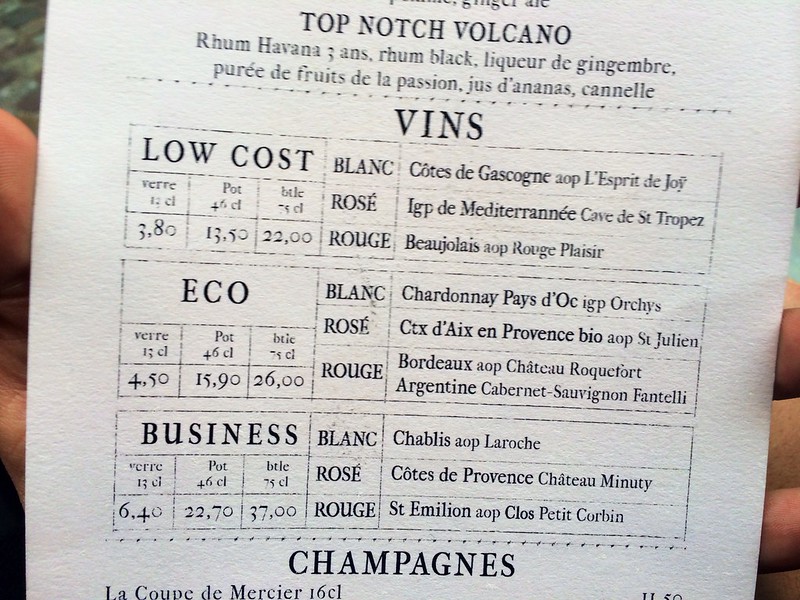 From Rue Cler, it’s an easy stroll to the Champ de Mars, the large public park that houses the iconic Eiffel Tower. As most people know, the famous landmark is named for its engineer, Gustav Eiffel, who designed the tower to stand as the entryway to the 1889 World’s Fair.

But here’s something I didn’t know – according to this 2012 article from the Daily Mail, not only is the the Eiffel Tower is the most visited paid landmark in the entire world (over 7 million paying visitors in 2012), it is the most valuable in Europe, beating out other famous sites such as the Colosseum in Rome and the Tower of London in, well, London. From the same article, research estimates the value of the Eiffel Tower is 344 BILLION GBP – with today’s translation rate, that’s over 520 BILLION US DOLLARS. All for a monument that was supposed to be taken down within a few years of its exhibit at the 1889 World’s Fair and which was heavily criticized at the time. Too bad Mr. Eiffel’s family isn’t collecting royalties from all this. 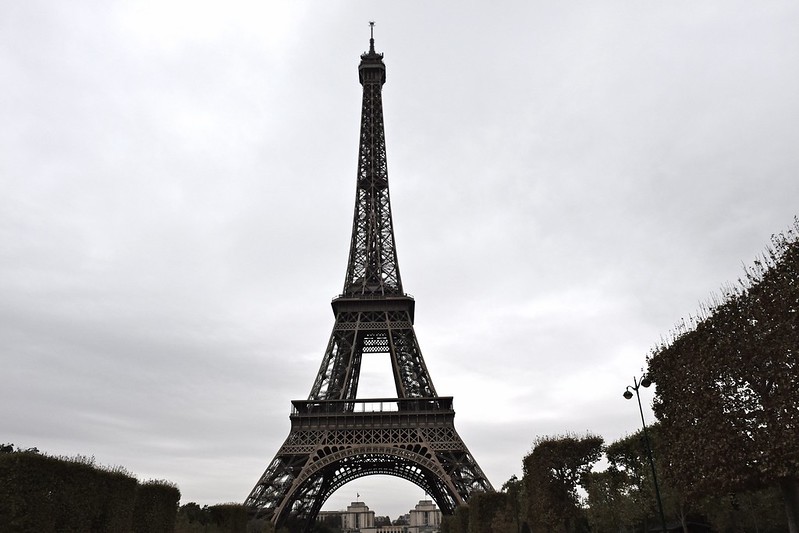 With all those people visiting the Tower, one thing you must do is buy tickets online before you go! Lines are insane, and even when we went, late in the day during the “off-season” for tourist travel, the line was over 2 hours long. I don’t know about you, but standing in line for that long is not an option while I’m on vacation. Think about all that wine you could be drinking!

If there aren’t any reservations open when you look, keep checking back, because they frequently open extra time slots the week before. When I first checked for tickets, they were sold out, but I was able to reserve ours exactly one week before we arrived in Paris. With our passes on our phones, we walked right up, breezed through the metal detector, and were on an elevator to the top within minutes – just in time to enjoy the sunset. 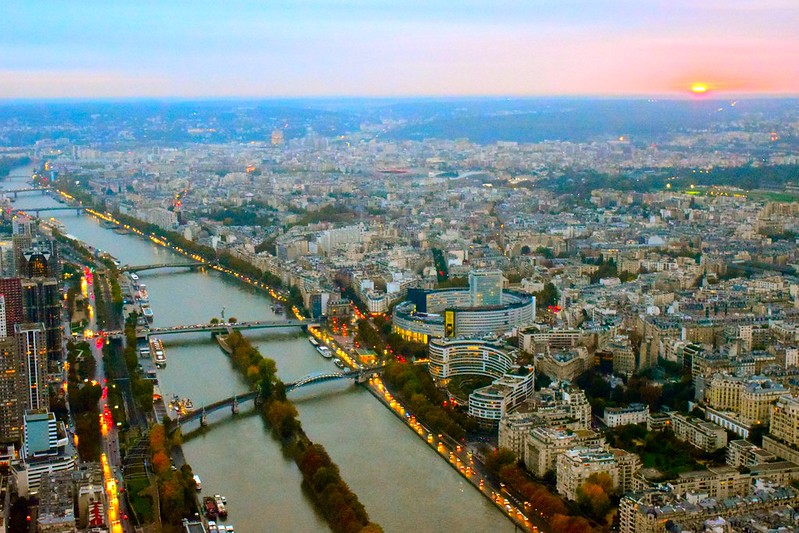 And take the obligatory selfie.

Here are a few more shots of the Tower at night (I couldn’t resist). The first one shows the huge pulleys that move the elevators up and down the Tower. 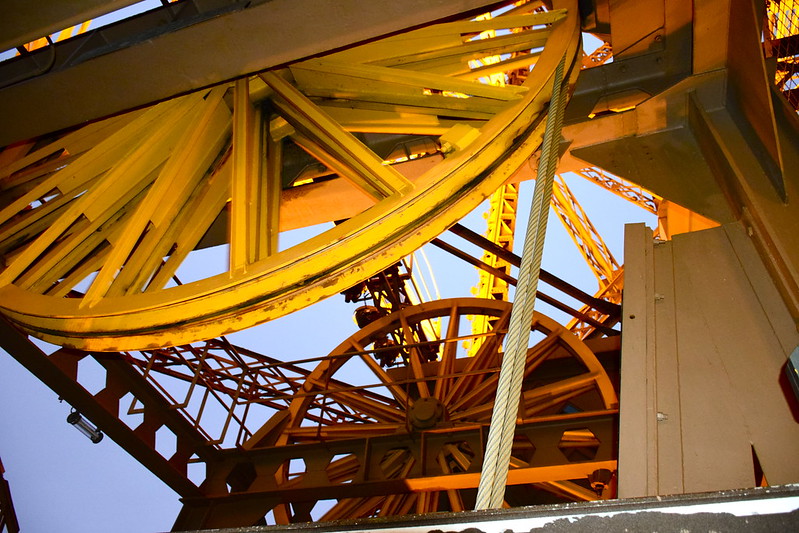 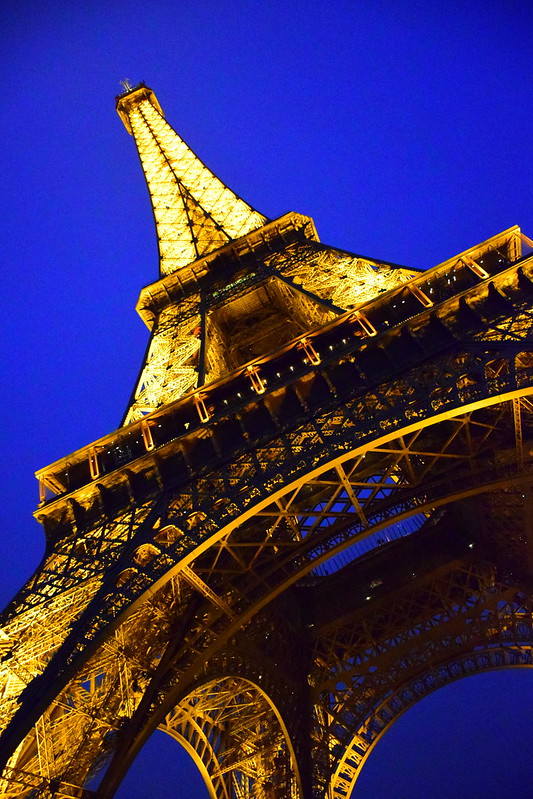 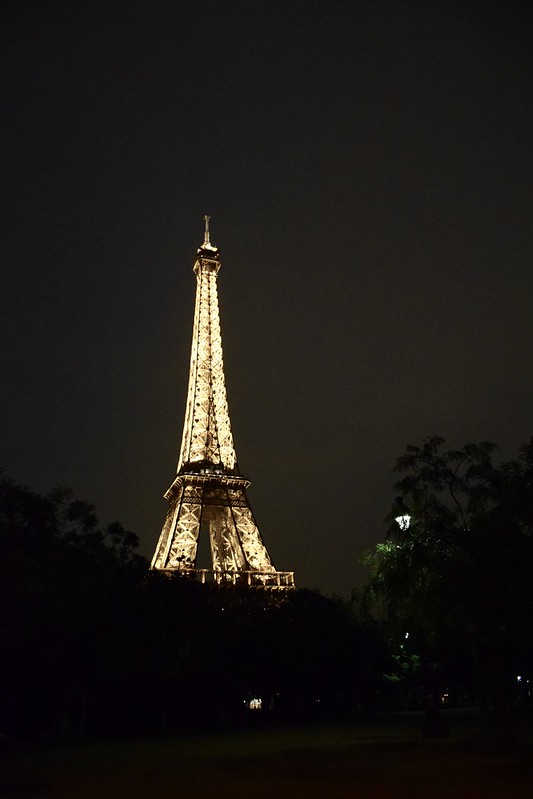 It was a wonderful first day in Paris, filled with wine, pastries, parks, and a stunning monument.