Our second day in London dawned bright and clear, with only a slight chill in the air. For London weather, it was absolutely perfect, and I was thrilled that I had planned for our morning to be spent on a walking tour through the city. Per the recommendation of friends and our guidebook, we decided on the company London Walks and chose the This is London – Flash! Bang! Lightening Highlights Tour! to get an overview of the city and see a lot of sites quickly. Here’s an excerpt of the tour description from the website:

And so we come to the rem acu tetigiste moment: everything you want to see in the famous heart of London can be seen on foot in two hours! Seen better. Seen up close. Seen round behind. Because we can go where the buses can’t. Seen better. Guided better. Fraction of the cost. So, hey ho and off we go – off to see all the classic sights in the heart of London. Tick ’em off: the Houses of Parliament, Westminster Abbey, Buckingham Palace, St. James’s Palace, the quintessential Royal Park, classy St. James’s, the Mall, Trafalgar Square, Admiralty Arch, Birdcage Walk, Queen Anne’s Gate, you name it. They’re all here – all the London pearls.

The tour started at the Westminster Abbey tube stop, right across from the Elizabeth Tower, the structure that houses Big Ben (as our guide reminded us, “Ben is not the clock, not the tower, but the bell that tolls the hour“). Thanks to the marvelous efficiency of the London Tube, we arrived 20 minutes early and had plenty of time to walk around a bit and take some pictures.

(Warning: what you are about to experience, some might consider picture overload. If you and your internet connection are up for viewing tons of vacation pictures, please continue after the jump.)

The tour began with our guide providing us with a few facts about the Elizabeth Tower and the adjoining Palace of Westminster, which was the primary residence of the King of England until a large fire in the early 1500s destroyed most of the building. After the fire, the palace was rebuilt and has served as the official home of Parliament ever since.

From our location at the Tube exit, our guide took us around the corner to Westminster Abbey. Although we didn’t go inside, we did wander about the grounds for a few minutes, giving us plenty of time for photos.

London even graced us with a beautiful rainbow, right over the Abbey!

The site of Westminster Abbey is said to have held a church since the 7th century. Ever since William the Conqueror was crowned here in 1066, it has been the coronation and burial site for English monarchs. The current church was built by Henry III beginning in 1245 to honor Edward the Confessor and provide himself with a suitable royal tomb.

From Westminster, we made our way over to Buckingham Palace to watch the Changing of the Guard ceremony, passing by some beautiful houses and through St. James’s Park.

Getting a spot to see the Changing of the Guard is difficult when you’re a group of 15 and on a time crunch (spots up by the palace gate fill up over 30 minutes before the ceremony), but we got a pretty good spot on the road to the left of the Queen Victoria Memorial. We arrived just as the police were shutting the roads down for the ceremony. We were in a great position to see the guards as they made their way to the palace.

As you can see, the lead horse left a present for the soldiers, right in their path. Without batting an eye, and without any spoken signal, the front row soldiers changed course by about 45 degrees, and everyone followed their new path around the horse manure. Something tells me they’ve had to deal with this before. I briefly considered trying to photoshop the horse droppings out of the picture, but I think it makes a better story this way.

Our guide then led us to a new location to catch the Queen’s Life Guard leaving the Hyde Park Barracks. We then continued on towards the barracks, where you can see the Changing of the Guard routine up close and personal. 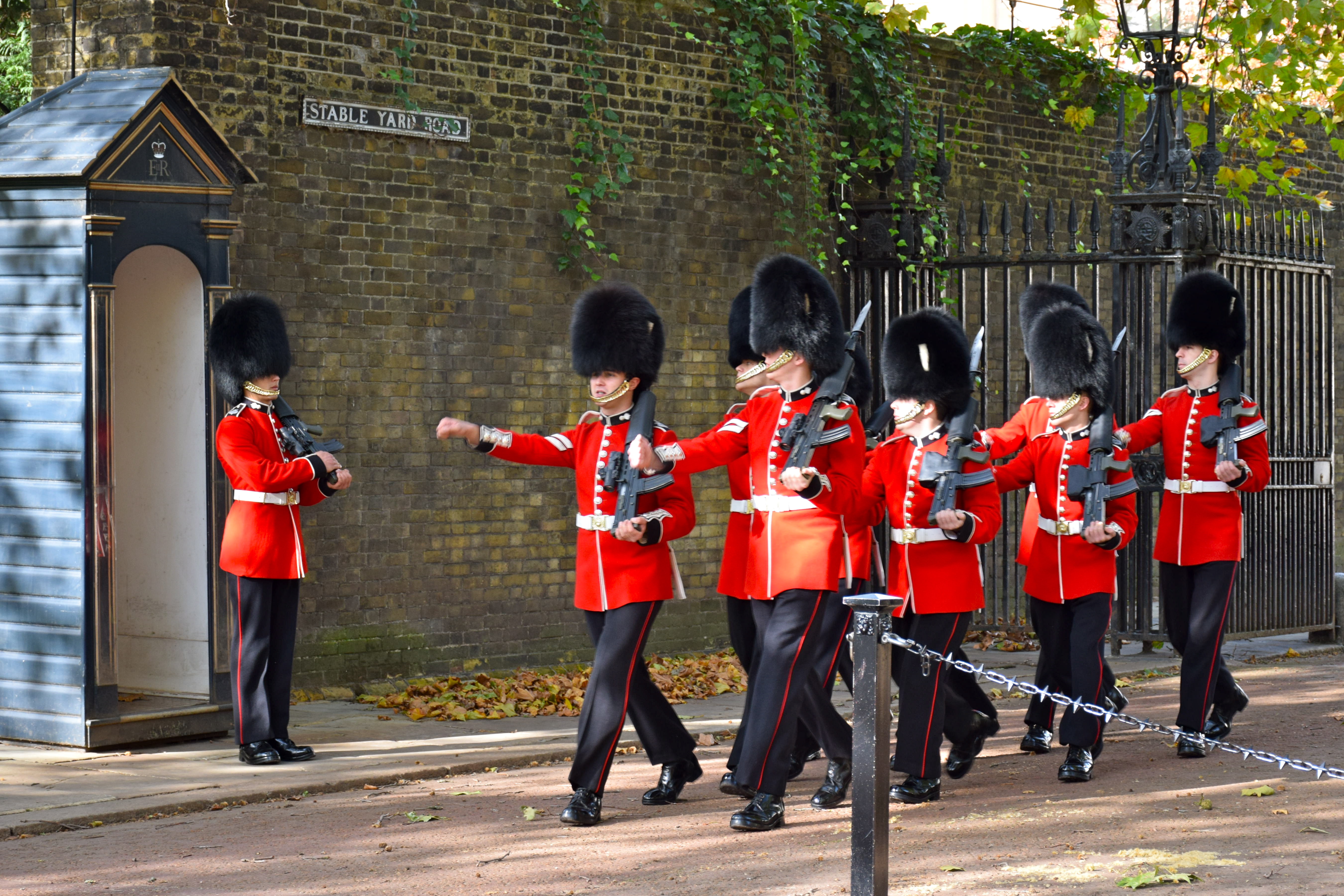 After all the the Changing of the Guard ceremonies, we headed to Trafalgar Square. Trafalgar Square is one of the city’s most famous and popular public spaces and was built to commemorate the Battle of Trafalgar (naturally). At the center of the square is Nelson’s Column, in honor of Admiral Horatio Nelson who died heroically in battle. The bronze relief panels at the bottom of the column were cast from captured French guns. 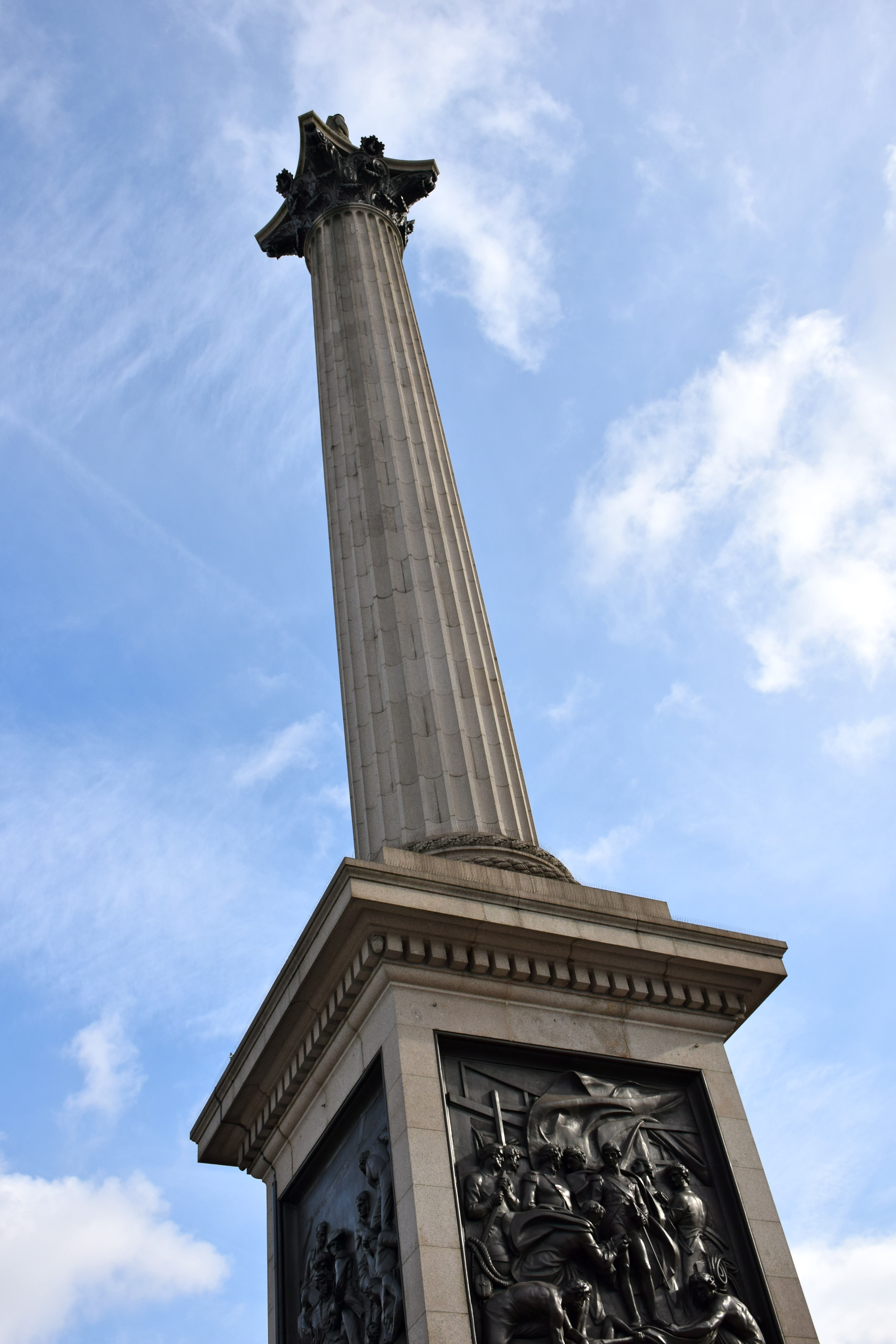 At the bottom of the column are 4 giant lions that are the real stars of the square (sorry, your Admiralship). Though they’re meant to guard the column, these lions are as cuddly as can be. Kids and adults alike lined up to have their picture taken. My husband, who never passes up an opportunity to climb up on something he probably shouldn’t, insisted we wait our turn. 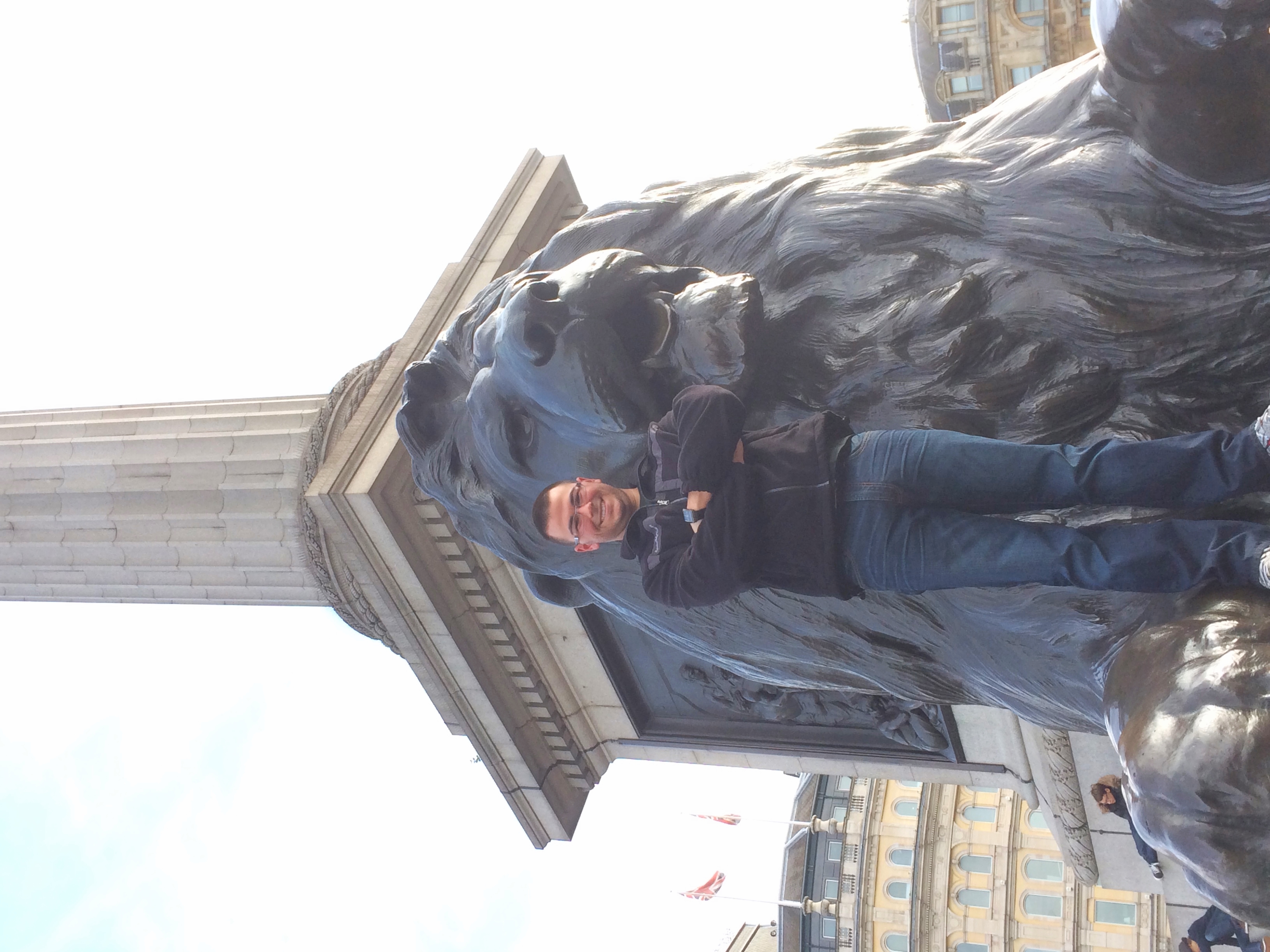 For the love of God or money, I can’t figure out how to get wordpress to display this photo correctly. But it’s a good picture and important to the storyline, so hopefully you get the point. 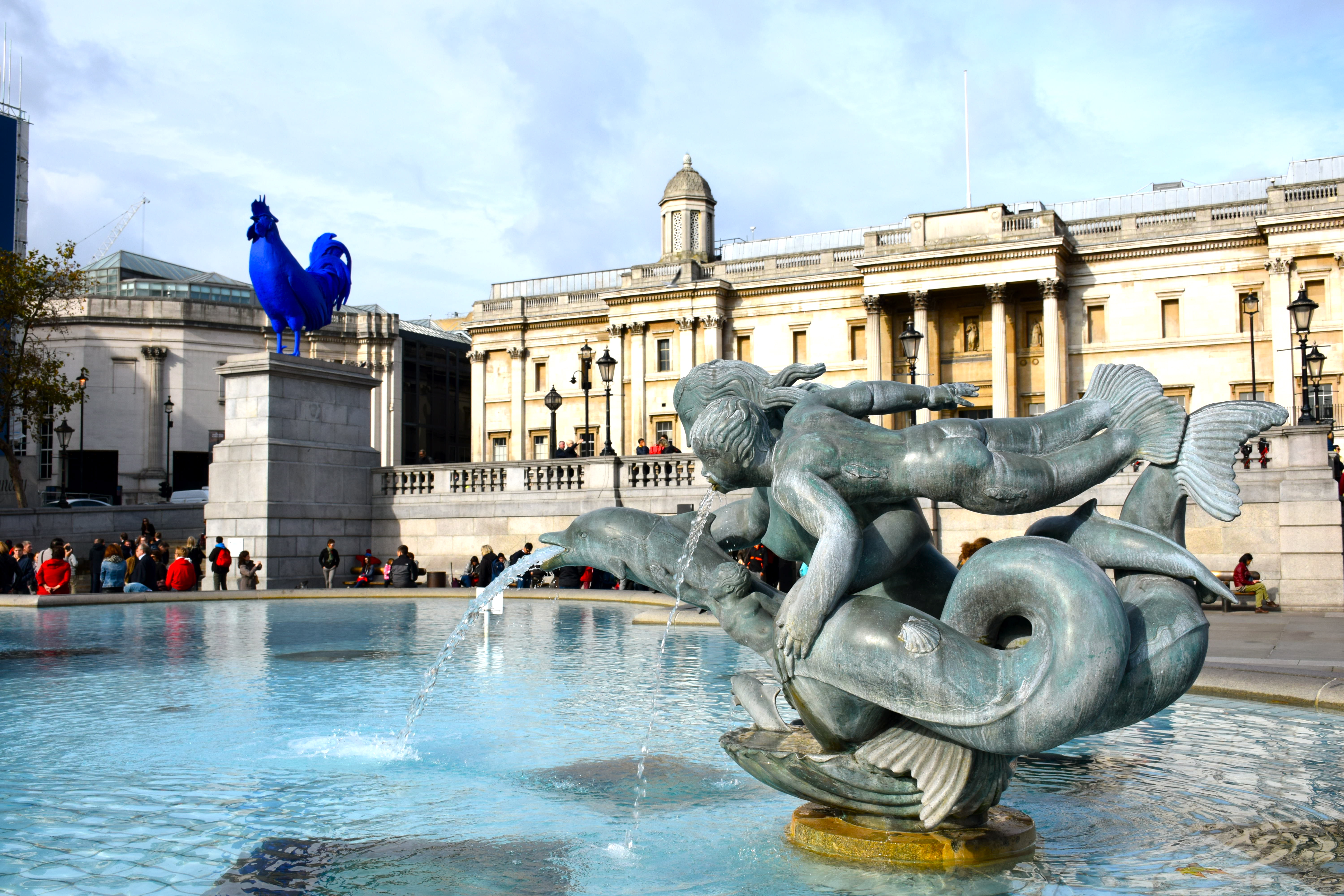 The blue rooster was the current contemporary art display while we were there. Since 1999, that column thing (apparently the correct term is a “plinth”) has been reserved for temporary displays of contemporary art statues. The cockerel is the traditional emblem of France and the statue represents regeneration and strength.

Our tour ended in Trafalgar Square, at the stair steps of the National Gallery. Entrance to National Gallery is free, so even though I promised Adam we’d spend as little time in museums as possible, while traveling abroad, the promise of a free, clean toilet is not something you want to pass up. On our way to the WCs, I did get to catch glimpses of gorgeous artwork, which sustained me for the rest of the day. After taking care of the necessities, we lounged around the Square for a bit before heading off to lunch at a nearby Thai restaurant.

Overall, we were incredibly pleased with the London Walks tour – and we are not tour group people. Generally, I find traveling in big groups to be frustrating, and it can be especially challenging to be packed into a large group with tourists who are….let’s say, not as cognizant of local culture? Basically, I was worried we’d be in a group of stereotypical bumbling Americans in white sneakers and ball caps.

And we were, to some extent, but our guide did a great job of keeping things moving and making sure our group was as unobtrusive as possible. For only 9 GBP, we saw most of the city’s highlights, were navigated efficiently and scenically between sights, and learned interesting tidbits along with way. London Walks doesn’t require advanced booking or reservations – you just show up at the tour start location, pay the guide in cash, and you’re on your way. If you’re in London, definitely check them out! We only went on the Highlights tour, but they have such a variety of tours (including pub crawls, which would have been right up our alley if we’d had more time in the city), I’m sure there’s something to tickle everyone’s fancy!

After lunch, we meandered back over to Westminster to tour the interior. At 18 GBP per person, it isn’t cheap (and something about paying to enter a church just seems strange, but I get it), but the history nerd in me loves seeing all the royal tombs and chapels and coronation sites. I simply couldn’t leave London without a visit (even though I’d already been on my earlier trip to London in 2009). There are some impressive burial memorials in the north transept, and of course the high altar is beautiful, but my favorite part of the Abbey is the Lady Chapel.

That ceiling is just too magnificent for words. The Lady Chapel was built by Henry VII, and it’s the burial place for he and his wife Queen Elizabeth of York. Other famous monarchs buried here include Mary I (only surviving child of Henry VIII and Katherine of Aragon, also known as “Bloody Mary” for her widespread persecution of Protestants), Elizabeth I (daughter of Henry VIII and Anne Boleyn, her tomb was actually placed on top of Mary I’s tomb, whoops), and Mary Queen of Scots (who was executed by Elizabeth I). I just love a good royal intrigue!

After Westminster Abbey, we stopped for nourishment (in the form of traditional Kentish cask ales) at the nearby Westminster Arms pub, before heading to the Churchill War Rooms. Hubby is a huge fan of WWII history, and since we would be visiting the Normandy D-Day sights later in our trip, I knew this museum was a must-see.

The visit starts off with a tour through the Cabinet War Rooms, a maze of basement offices that was occupied by leading government ministers, military strategists, and PM Winston Churchill from 1939 – 1945. The War Rooms were a safe space for Britain’s VIPs to meet during air raids and with their prime location in downtown London, close to Parliament and Whitehall, could be used to shelter the PM and important cabinet members in the event of an emergency evacuation. The War Rooms provide a fascinating insight into how hundreds of people lived and worked during the war. Nearly every room has been left exactly as it was when the facility was closed in August of 1945, and helpful signs and the included audio guide give context and deeper meaning to the various rooms.

After the War Rooms, you emerge into the Churchill Museum, which uses high-tech interactive displays and cases of personal artifacts to tell you about the man behind the legend. The museum traces Churchill’s entire life, from his birth into an aristocratic family, to his career in the British Army, to examples of his writing and even his paintings later in life. It was fascinating to be sure, but there was so much information, I started to get overwhelmed. Adam, however, was in Churchill heaven.

Eventually, we both reached our museum-saturation level and agreed it was time to head to our next pub, via a walk through St. James’s park. 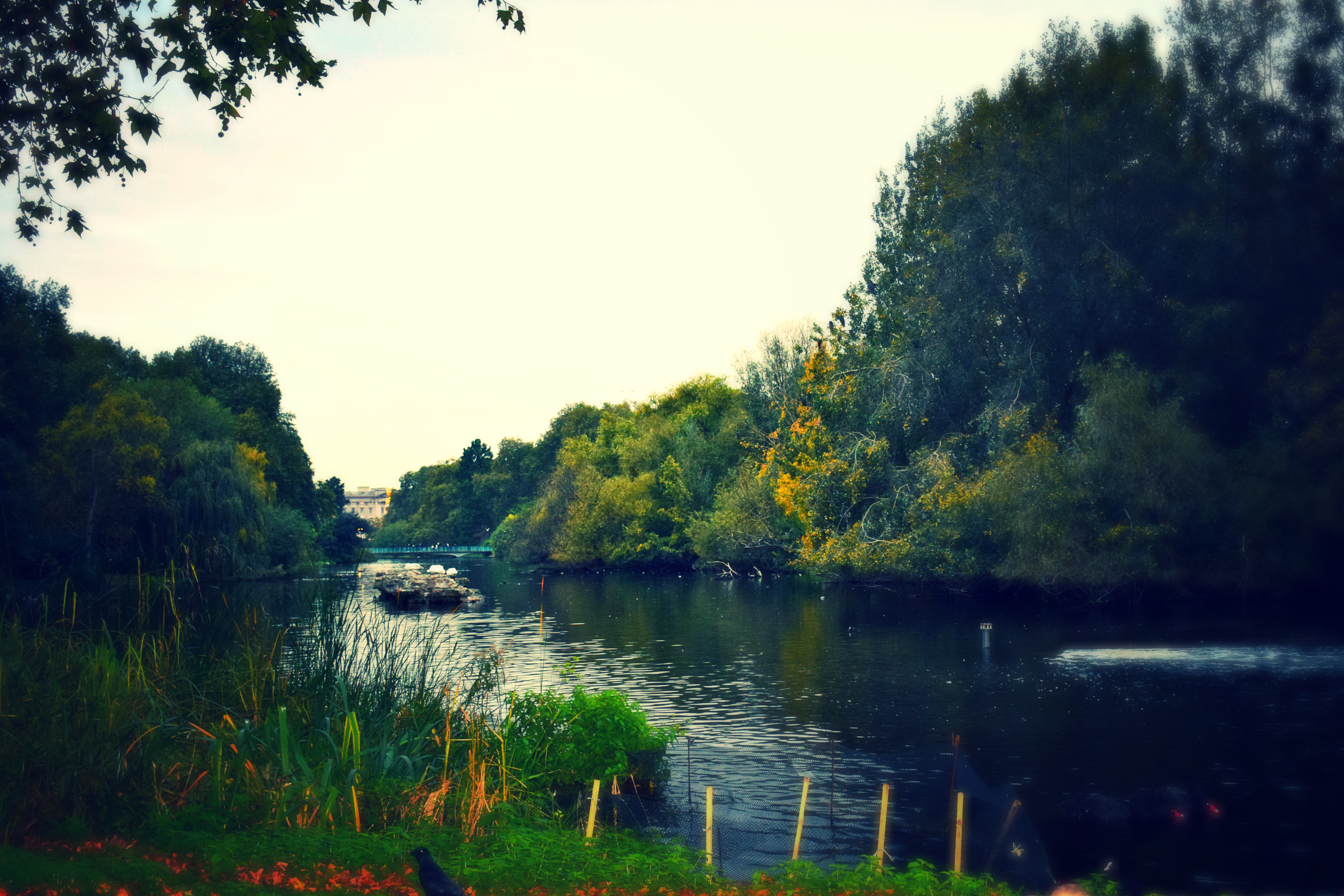 We decided on a nearby Irish pub for a well deserved Guinness after a long day of sight-seeing! 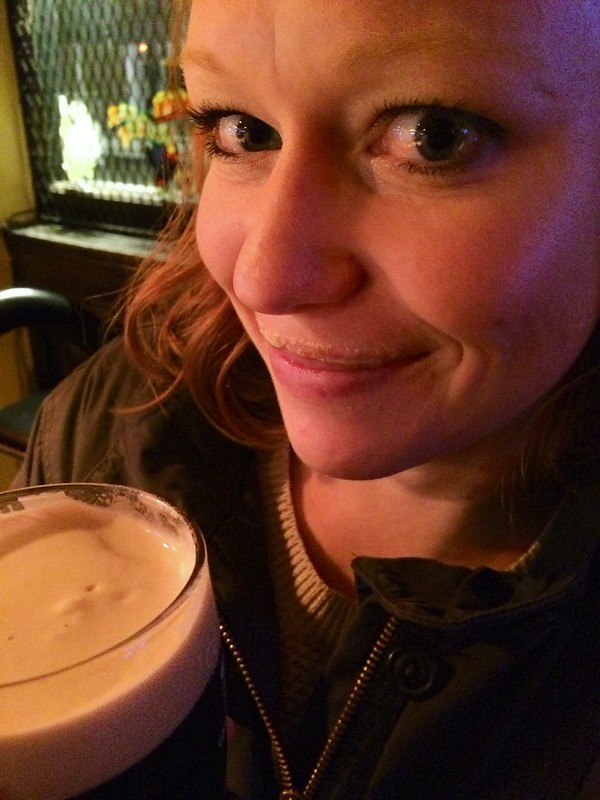